The Dolomites are the ideal setting for both romantic and action movies. Protected by UNESCO, the mountains surrounding Cortina d’Ampezzo, are universally famous for their characteristic color, due to their particular composition made of shells, corals and calcareous algae (in fact, up to 250 million years ago, there was a tropical sea here!), as well as for their splendid peaks that, over millions of years, the weathering has transformed into “the most beautiful architectural work in the world” as the famous architect Le Corbusier declared.

The beginning of the touristic fame of Cortina goes back to the end of the 19th century, when mountaineering became popular among the Austrian, the English and the French upper middle class who, falling in love with its wonderful landscapes, started to go there, turning it, in a few years, into the favorite destination of the international jet set.

These two contrasting aspects of Cortina, the internationality and the beauty of its natural landscapes, have turned it into the ideal set for many important movie productions. Let’s discover the cult films shot in Cortina and where some of the most famous scenes in the history of cinema were shot. 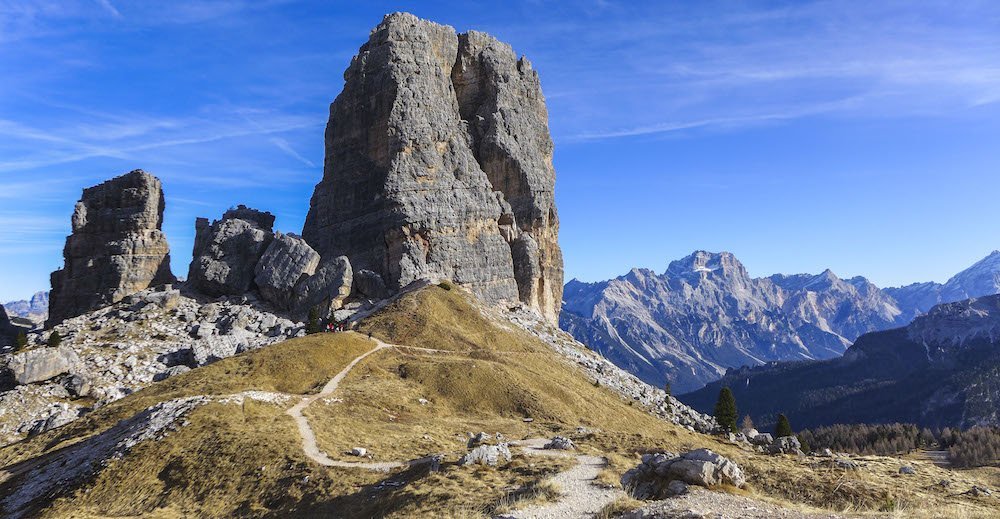 The Pink Panther is a delightful romantic comedy from the 60s starring Inspector Clouseau (Peter Sellers) who is after a gentleman thief (David Niven). Really worth seeing for his beautiful opening credits, it also became legendary for the soundtrack by Henry Mancini (the author of the wonderful Moon River sung by Audrey Hepburn in Breakfast at Tiffany’s) and a magnificent Capucine (pseudonym of Germaine Hélène Irène Lefebvre, gooddess actress and model that completely overshadows Claudia Cardinale in the movie), more charming than ever dressed by Yves Saint Laurent.

Partially shot in Cortina, the movie is set inside the Hotel Cristallo, even if many interior scenes have been recreated in studio, whilst the lavish Casa Menardi is the actual name of the chalet where Claudia Cardinale is staying. Projected by famous architect Edoardo Gellner and commissioned by the hotelier Leo Menardi, the chalet is located right next to the Hotel Cristallo which was opened by Menardi’s family in 1901. The Pink Panther is certainly one of the films that has best captured the 1960s Dolce Vita embodying a charming Cortina still “unaware” of the mass tourism.

A splendid 27-year-old Faye Dunaway and a mature Marcello Mastroianni are the protagonists of the movie A Place for Lovers, trivially translated as “Lovers” in the Italian version, a melodrama shot between Treviso and Cortina. Despite the slowness and flaws of the script, the film is a real gem for the intense interpretation of Faye Dunaway, her great outfits created by costume designer Theadora Van Runkle (the one who created Bonnie & Clyde’s style in their homonym cult film shot in ’67), and of course for the amazing locations. The “Place for Lovers” of the title is in fact Cortina itself with its cruel and romantic landscape at the same time, just the perfect setting for a love that won’t last.

Many scenes of the film are shot in the center of Cortina between Piazza Roma, the SS. Filippo and Giacomo Basilica and the windows of the famous Bredo fashion store (which today, together with Franz Kraler, are still the two cult addresses for fashionistas). In the final scenes you can spot the Monte Lagazuoi refuge, located on the summit of the homonymous Monte Lagazuoi over the Falzarego Pass, where today you can experience the highest sauna of the Dolomites!

Also 007 For Your Eyes Only was shot in the glamorous Cortina. The leading charachter Roger Moore stays in fact at the famous Hotel Miramonti in room No. 300. Almost half of the movie was actually shot in Cortina; in fact this spy-story is perhaps the movie that best describes the town’s wonderful ski slopes as well as the incredible variety of winter sports that can be practiced here.

In the movie, James Bond, after a ride with the traditional horse-drawn sleigh and a visit to the Olympic Ice Stadium, films one of the most famous stunt scenes of the history of cinema. Chased on the ski slopes by evil motorbikers, Roger Moore climbs up to the Tofana – Freccia del Cielo cable car and then launches himself from the Olympic trampoline (built for the 1956 Olympics and now dismissed) ending up descending at crazy speed on a bobsleigh track. When, returning to the Ice Stadium, the Bond Girl asks him why it took him so long to come back to her, Bond replies with a smile and his signature English humor: “Well I took the panoramic slope!”.

This is undoubtedly one of the more popular Italian comedies with an unforgettable soundtrack that includes the most iconic tracks of the 80s from I Like Chopin by Gazebo to Moonlight Shadow by Mike Oldfield.

Protagonists are once again the most famous hotels of Cortina, from the Hotel Cristallo, to the Hotel Miramonti, up to the central Hotel de la Poste located in Piazza Roma.

After a ski session, the protagonists stop by Baita Piè Tofana, at that time just a simple bar, that today has turned into a sophisticated restaurant. But the signature location of the entire movie is definitely the Vip Club, the famous nightclub located in Corso Italia inside the Hotel Europa. Silent witness of thousands of love stories, still today “Vip” is the undisputed hotspot for Cortina’s jetset. The movie became so popular that was followed by two sequels: Vacanze di Natale 2000 and in 2011 Vacanze di Natale a Cortina.

For those who love the 90’s action movies and Sylvester Stallone, Cliffhanger is definitely a must. Set in the American rocky mountains, but actually shot mostly in the Dolomites, the movie begins with the famous stunt scene where Stallone does some amazing acrobatic free climbing on the Vajolet Towers located among the Catinaccio peaks.

The movie has been mentioned by the Guinness World Records for the most expensive air stunt ($ 1 million!) ever performed. The scene, featuring a corrupt agent jumping from one jet to another at 4,572 meters high, was played by the famous stuntman Simon Crane without wearing any security device and computer graphics postproduction.

Among the other beautiful movie locations, we find the Boite river in Fiames, where Jessie (actress Janine Turner) lives, and the Monte Faloria cable car with its stunning view on the Tofane mountains and the Croda da Lago. One of the most spectacular scenes was shot at the Lorenzi Refuge, on the Dibona ferrata trail, where the famous suspended bridge is located. This bridge was really blown up during the filming and then rebuilt at the end of shooting. 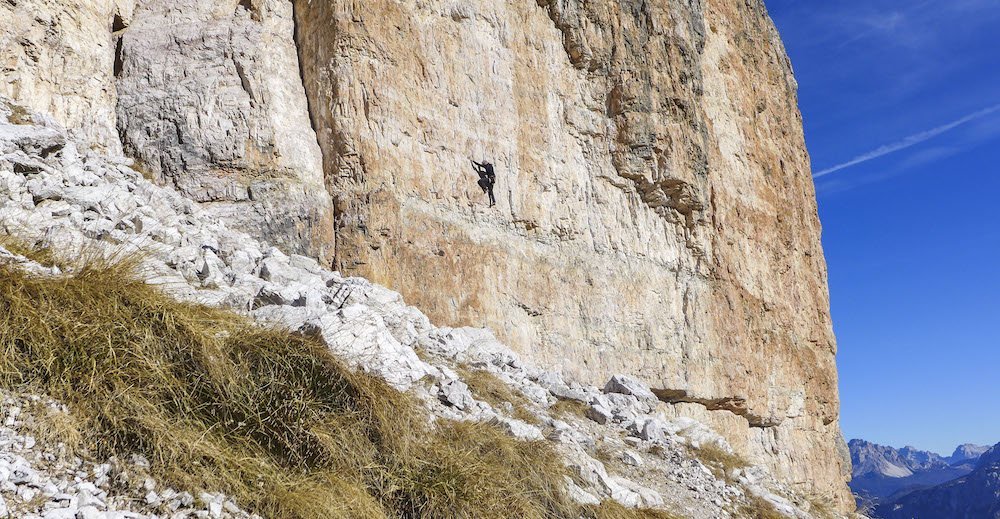 The movie is the remake of the absolute masterpiece Point Break shot in 1991 by director Katherine Bigelow featuring the wonderful duo Keanu Reeves-Patrick Swayze.

Even if this version is not as good as the original one, it is definitely enjoyable for the beauty of the extreme sports stunts. Young FBI agent Johnny Utah is, in fact, a former athlete hunting a criminal organization whose members are dedicated to all sorts of adrenaline disciplines: from B.A.S.E. jumping to wingsuit flying.

Two of the main stunt scenes were actually shot in Cortina: during a chase, Johnny (actor Luke Bracey) launches himself on top of the Tofana – Arrow in the Sky cable car and, in the final scenes, when Bodhi (actor Édgar Ramírez) attempts to blown up the mine, the motorcycle race was shot along some scenic trails in the Col dei Bos area near Passo Falzarego. 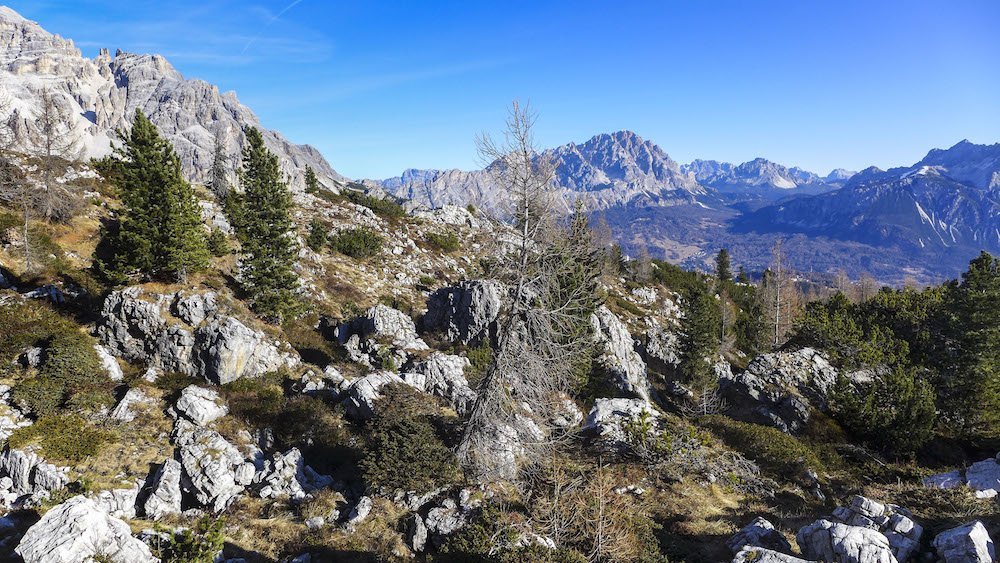 The second spin-off about the story of Han Solo, one of the most beloved Star Wars’ characters originally played by Harrison Ford, was filmed between Auronzo di Cadore and the Misurina lake, where you can enjoy two of the most amazing panoramas of the Dolomites: the homonymous lake and the imposing peaks Tre Cime di Lavaredo.

The Star Wars set involved two particularly significant areas that hosted a tragic yet never forgotten story. The first one is Monte Piana, a plateau at 2324 mt sadly protagonist of some cruent battles over First World War, now become an open-air museum, whilst the second is Locatelli refuge located at 2,405 mt. from which you can enjoy a wonderful view on the Tre Cime di Lavaredo. Certainly two of the most magical places in the Veneto Dolomites that offer walks and excursions for all levels of difficulty.

The secrets of the “two” Cupid and Psyche by Antonio Canova

From Asolo to Grappa: the dream addresses in the footsteps of Canova

The secrets of the “two” Cupid and Psyche by Antonio Canova